PHP is one of the most major languages that is used in web development in this age. This server side language, made specially for developing the web and nothing else, has been powering the world wide web since past decade, and has some major sites like Wikipedia and Facebook made through it.

While you can code whole websites in raw PHP, a PHP framework provides a lot of reusable code and libraries which will make your development faster, safer and more manageable. 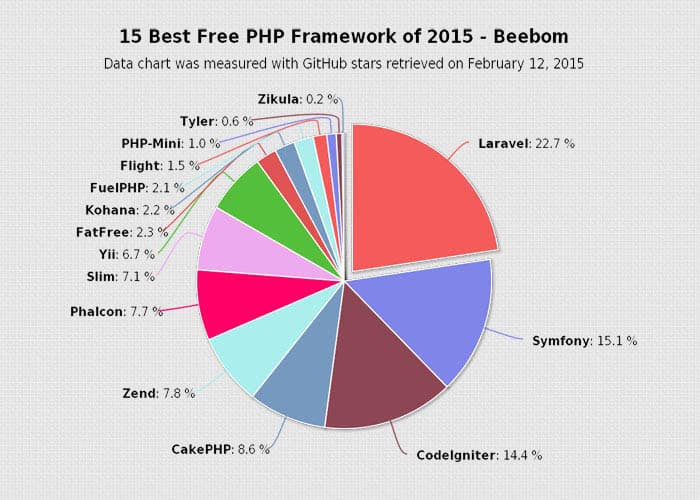 We sorted out the best PHP frameworks that are in use today, and give you a detailed analysis of it. You can go through this list and choose any of these frameworks to use it in your next project, be it a simple personal site or an enterprise grade startup serving thousands of users.

Codenamed as the PHP framework for web artisans, this framework tops our list of PHP frameworks out there. This framework is really good for writing good code that is easy to maintain and extend. Its initial release was just three years ago, thus its very modern, and it rose to immense popularity in this period. The models and the routes are RESTful by default, and with a hell lot of other good features, this framework is the best in PHP to create modern web apps and APIs.

Like Zend, Symfony also is suitable for creating enterprise grade applications, which can scale to millions of users. This project can act as a set of reusable components, or as a full framework, and it depends on the developer on how he will use it. High performance of this framework has made it suitable to be used in projects like Drupal and PhpBB which power millions of sites online. It also inspired other frameworks like Laravel and Zikula.

Highly recommended for beginners, this framework is good for people who have coded in raw PHP and want to give frameworks a try. From 2006 till 2013, EllisLab maintained and developed the framework, however, back in mid 2013, they announced that they are looking for new takers of this framework as they feel they can’t give more attention to it as required. Since then, Codeigniter is maintained by British Columbia Institute of Technology.

This framework boasts configuration less development with full featured libraries for all the common development tasks. Sometimes applauded for the cleanest MVC structure out there, which is one the best in industry. This framework dates back to 2005, hence has matured a lot, both in codebase and community. Documentation is good, and with lot of projects out there, users can also find examples and get good help in development easily.

This framework has been around sometime, so it has matured a lot to make enterprise grade software. Often noted as the most commercial PHP framework out there, this framework also features a complete IDE called Zend Studio and a Zend server for developers to use and deploy apps quickly and efficiently. Give no further thought if you need a build applications for enterprises and want a rock stable, full proof solution.

This framework claims to have the best performance among all other PHP frameworks, and is really suitable for building high traffic sites and apps. Unlike micro-frameworks that tend to sacrifice features for performance, this framework is full featured, so you will be able to build more that just REST APIs. Ample documentation also makes this framework ideal for beginners.

Among other micro-frameworks in PHP, Slim deserves a special mention for its really light codebase and lightning fast performance. Though it is ideally suited for API development, you can also code whole applications in it without any troubles. It’s code is similar to Flight, so developers switching from it will notice very less difference.

Yii is really powerful because it has a good number of plugins that you can just add to your site and extend it in minutes. Be it a small sharing widget or a whole photo album to payment gateways, you can just build the barebones of your website in Yii and keep customizing it with plugins that you find in their extensions database. Though you require intermediate experience in PHP to work in Yii, it also has extensive documentation that beginners can follow and give a try. The framework also boasts of its high-performance, thus also suitable for high traffic sites.

This is one of the frameworks that we will really recommend for beginners. The documentation is really nice, the framework is really small and apps built with it perform really fast. Its the perfect toolkit for getting started with pet projects if you are just coming from raw PHP background. There is a well written user guide that you can follow, and really nice examples like building a CMS which will give you a head start in your PHP development.

The framework that powers the popular site, Couch Surfing. The development of this framework was started in May 2007 when some of the core community members of Codeigniter decided to create a whole new framework by forking it. Though it is based on Codeigniter, it gives much more faster performance and quite suitable for sites that receive a high volume of traffic. The community is quite helpful and also has good documentation available for beginners.

As an MVC framework, FuelPHP really helps you to keep components of your code separate, model and logic model in Models, the application logic in Controllers and the UI in the View. That is really helpful if you really want to build a big site and have lots of code to right. Further, the developer has the full capability to extend the MVC model to a HMVC one (Hierarchical Model View Controller) thus making it perfect fit for modern web apps. Ample documentation and class API description makes it a good framework for beginners as well as advanced users.

REST and JSON are taking over the web right now, and if you need a PHP framework just for that, Flight is your best choice. This framework comes with support for writing really clean code, hence not only it gets the job done, but also is easy to maintain. Though the features of the framework is really less, just building a REST API, it does that job really well.

Goes by the name a super simple naked PHP boilerplate, its not really a framework by its name, but its really useful for those people who still like to code in raw PHP code. This framework will help you get started in seconds as it comes with a nice auto-installer. Some of the best features of this framework is that it comes preconfigured with creating clean SEO friendly URLs and it has in built support for Create, Read, Update, Delete models (CRUD) on the database. Not much documentation is there, hence we have to leave this framework too as a recommendation for beginners.

As the name says, this PHP framework keeps it simple as possible, with really a small codebase. As said in their GitHub repo, this framework provides a starting point and does most of the work automatically, like user authentication, database calls, RSS feeds etc. The developer of this framework has purposely left a lot of features that people use rarely, hence it may happen that you have to use custom code if you need a new feature not inherently present in the framework. Like Zikula, this framework suffers from lack of documentation, so not recommended for beginners, but can be a gold mine for experienced programmers who know the way of getting things done.

This framework is built upon Symfony, one of the most widely used frameworks today. But since its a stripped down version of Symfony, it is not that power hogging and uses much less resources. World’s most popular frontend frameworks like Bootstrap and jQuery come built in with this, so if you need a simple site with good UI, this will be your best bet. Though I found support for extensions and modules, there is not much documentation available for beginners, so choose this only if you are an experienced PHP developer.

That’s our list of best PHP frameworks out there. PHP, which was once a language for creating simple home pages, has grown tremendously and now powers a large portion of the web. With so many awesome frameworks out there, we can only expect its usage to grow more.

How to test AngularJS SVG directives