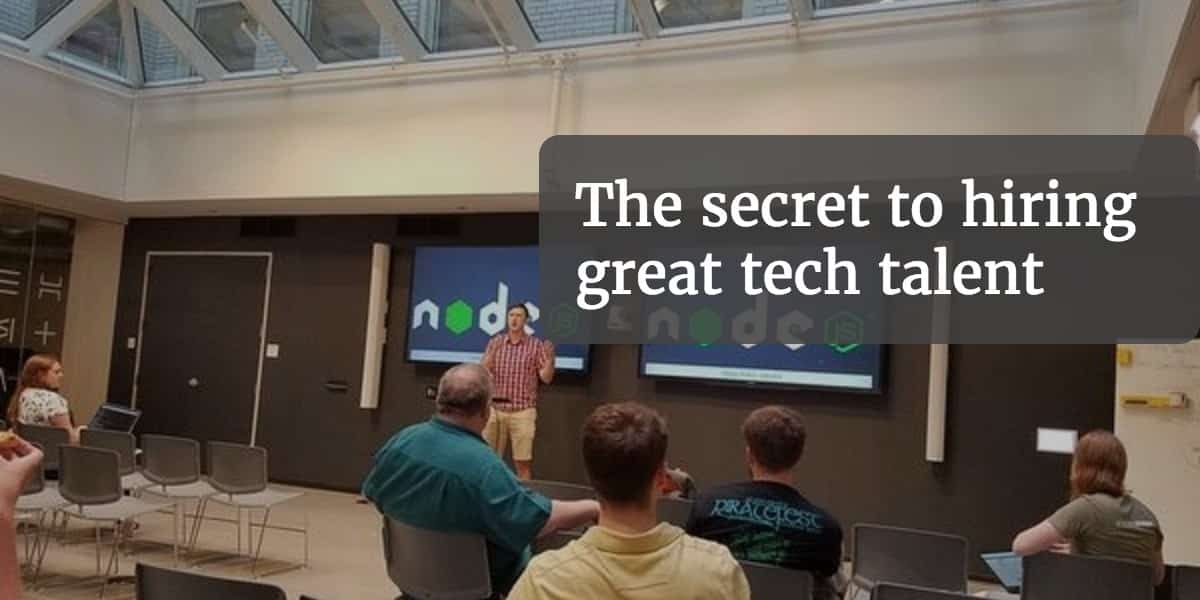 Top developers aren’t searching for jobs. They aren’t using a recruiter. So if your company is just putting out job postings and using recruiters to hire, you’re already looking at second tier candidates.

How then, can companies find and retain top technical talent?

We got the chance to talk with Mike Hostetler, Director of Front-End Engineering at Raise, and technology advisor to a number of startups, about how he uses in-person and online communities to find top tier technical talent.

Power of Connections: How a Meetup Event Helped Fill a Specific Role for Qualcomm

The secret to finding and hiring amazing technical talent, says Mike, is being an active participant in developer’s communities. We’ll define what he means by “communities” below, but Mike says it comes down to ensuring you “walk the walk before you talk the talk… in the local developer ecosystem.”

In other areas of a business (marketing, sales, recruiting) this advice seems like a given. Yet, Mike has seen companies consistently fail to apply it to the technical side, and it’s a big reason they end up struggling to find great talent when they need it.

Mike can personally point to numerous hires that probably never would have happened had he not been deeply involved in these communities.

Filling a niche technical role for Qualcomm with community based connections

In one instance, Langa, a company Mike works with, was hired by Qualcomm to help them fill a very specific role — an experienced node.js developer, based in San Diego — and they wanted it filled quickly. Mike says it normally would have been “brutal” to try and find someone to fit the position.

Travis Webb, Langa’s CEO, was able to fill this role by leveraging relationships he’d built years earlier. Specifically, Travis had previously spoken at a meetup in Los Angeles and had a great conversation with a couple of people at the event– one of which happened to be a locally-based senior Node.js developer. Because of that, filling the role went from nearly impossible to as simple as calling that connection.

The reason, Mike says, is that top technical talent is more in demand than ever and their needs are no longer purely job security and compensation — they can get both in any number of companies. Instead, they value other aspects of a role like a supportive environment, a great culture, and a chance to grow. Combined with that, they are naturally skeptical of most corporate environments, so trust plays a large part in their decisions.

In the age of Glassdoor, everyone is looking to their peers for advice on where to work — this is no different in the engineering community.

Mike says the biggest issue he sees facing companies is that developers “look at the work environment that a company creates and they feel that it’s constraining, not interesting, and doesn’t lend itself to a creative, supportive environment. So before companies even get out of the gate, by nature of their reputation, they’re often marginalized by talented developers.”

The most common way developers found their current job is that a friend, family member, or former colleague told them.

For guidance, he says, they look not only to Glassdoor, but also other places like Github threads and the Stack Overflow Developer Survey. And, according to the 2017 Stack Overflow Survey, the most common way developers found their current job is that “a friend, family member, or former colleague told [them]”, giving statistical evidence for exactly what Mike is saying about the importance of communities and reputation.

Developers need to hear from their peers that a company culture is one they would want to join. If you’re only showing up on the engineering community’s radar when it comes time to recruit, there will be no reputation to support your culture as desirable. Creating trust in your culture is key, and the only way to do that is through positive engagement with the community.

Your Company Needs a “Give First” Culture

This community based recruitment strategy has the ability to do the hard work for you when it comes to recruiting top talent. Why, then, aren’t more companies doing it?

He maintains that giving back to the community is key, and the best way to do so is “by demonstrating your culture is one that brings junior developers in and gives them an opportunity to sharpen their skills and grow.”

For example, Mike organizes the Node.js Chicago meetup, which gives him an opportunity to give back to the community and connect with developers in a very creative way: he offers mentorship on how to give meetup talks to top Node.js developers from companies in the Chicago area.

This has a multiplying effect both for Mike’s network and the community. He forms relationships with top developers in his region, who then contribute to his meetup. Mike’s mentorship then allows these top developers to effectively share their knowledge and connect to their peers, which strengthens the group as a whole. It’s an approach that he jokingly calls his “dark horse to get into any company in town.”

Having done this for over a decade, Mike holds that community engagement like this is the secret to finding and hiring top technical talent. So, from the outside looking in, where do you start?

The Rundown of Developer Communities

These communities, as Mike defines them, exist in different mediums, and within those mediums, on many different levels. There are umbrella communities and subcommunities, which crossover at the intersections and evolution of new coding languages.

First, you have to identify which community is going to have the talent you are looking for– and, importantly, where this community crosses over into others. One example Mike gives are the ReactJS and Node.js communities, which have approximately 80% crossover. So, if you are looking for a Node developer, you could just start with the Node.js-specific communities, but you can gain even more visibility by getting involved in ReactJS communities, as well.

From there, the next step is to find both digital and physical communities related to this technology and get involved.

Digitally, one of the best places to go is to a source code repository and the connected issue queue. Mike says “that’s where you find out what’s going on within the source code itself.” Developers are craftspeople, and the good ones seek out personal challenges. This often involves iterating on the open source code, and subsequently, the conversations developers have about their learnings and obstacles are a great “jump-in” point.

Second, a more surprising channel where Mike “finds a lot of [his] best intel on what’s going on in tech communities,” is Twitter. He says this is especially true for the veteran developers, who still very much use it as a place to keep each other updated (because they often joined Twitter early on). A younger option is Gitter, which builds chat rooms around GitHub repositories and has grown substantially in recent years.

The advantage of these less strictly technical forums is the ability to create a personality. Mike pointed to Scott Hanselman, Principal Program Manager at Microsoft, as a prime example: he has over 189,000 followers and a whopping 154,000 Tweets on topics ranging from tech, to politics, to his 7-year old asking “Is Beyonce Marvel or DC?” Because of this “larger-than-life” presence, he’s an invaluable face at Microsoft and makes the company attractive to developers by association.

While these digital communities provide a value in terms of broad exposure and convenience, physical, face-to-face conferences are really the ideal way to build lasting connections. Mike identifies three main categories: international corporate conferences, regional conferences, and local metropolitan conferences. International corporate conferences are “the major league” events, with high ticket prices and huge sponsors. Though these are important, for the purpose of connecting and interacting with the community to find potential hires, regional and local events are far more effective.

Come to a meetup one time and not come back…that just doesn’t work.

Mike pulled up a mid-sized, Chicago-based company’s website during our interview, pointing out an obvious trend in their openings: “they are desperate for engineers.” Yet, there’s a local developer conference coming up in the area — which he plans on attending — and he can “almost guarantee” they aren’t sending anyone.

And Mike only calls them out because they sent someone last year — but even that’s not enough. He says companies “will come to a meetup one time and not come back… that just doesn’t work. You have to be an active participant, you have to give first before you expect to get.”

The How-To of Community Involvement

The Hiring Manager Needs to be Personally Active

There are many ways to be involved in any of these communities, but it cannot be emphasized enough: you must be an active participant.

Mike applied this to the case of conferences and meetups: “a speaking slot is 5x more valuable than a sponsorship slot.”

Why? Through speaking, he says, you are verbally and visually demonstrating that you are giving back to the community. Through speaking, you get positioned as an expert, and people will come to you with questions. Through speaking, you gain access to a speaker dinner, in which you have a chance to sit down and talk to other influencers in the space. Overall, you are a far more active participant and visible personality at the event, and developers will remember that.

A speaking slot is 5X more valuable than a sponsorship slot.

And this can be applied to digital as well: don’t just favorite a Tweet, tweet a thoughtful response back. Don’t just monitor a Github conversation, contribute something relevant you know about the topic. Always choose the active role over the passive.

And it doesn’t only have to be the hiring manager who does this. In fact, it shouldn’t be. Invite other people on your team to get involved too. Have challenge days where everyone teams up and tries to solve a popular software issue on a Github thread. If one of your developers enjoys public speaking, try to get them in front of a local meetup. Don’t go it alone — think of where your team’s strengths lie, how those can translate into community engagement, and encourage them to give back.

The relationships need to be built before you need them

But it’s not enough to be active in the community only when your company has a need. Mike emphasizes that you should be giving back and building these relationships before you need them (and with the knowledge that you may never need them). You should go back to the conferences, keep up with the people you meet, and continue to give back to the community as much as you can. Just as with all networking, the only thing worse than doing none at all is doing so inauthentically.

Being active in communities is a long term strategy, not a quick fix. The fact is, you won’t always know who you’ll need down the line. Using this method, you might connect with 100 people, and only ever call on one to fill a vacancy. But the other 99 you met? A few of them might know someone perfect for the position too, and refer them to you when you tell them about the opening. And the thing is, people will be happy to make that referral, because your company’s culture has a reputation of fostering talent and making meaningful contributions to the industry.

The bottom line: if you give to the community and authentically invest in it, it will give back to you.

How to Innovate Inside an Enterprise Organization: Matt Savino of DIRECTV

How Microservices Saved the Day: Sean McCullough on Explosive Growth at Groupon