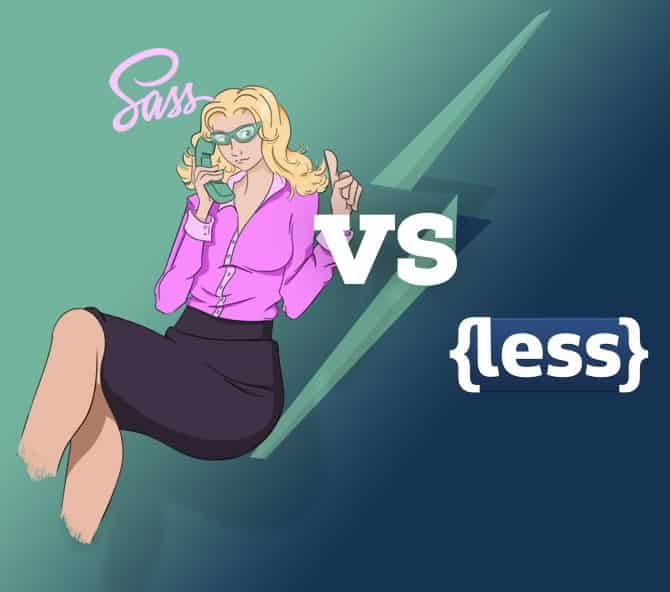 The Sass versus LESS argument has been done to death. In this article I’ll explain why Sass really is the best and why you should start using Sass if you haven’t already. If you are interested, I’ve also written about how to get started using Sass and the problems with pre-processors.

Before I begin my highly opinionated tirade, let me just mention that I learned LESS first. LESS is great for beginners: it’s really easy and quick to set it up. It’s very similar to plain CSS, so writing it is intuitive. Compared to CSS, everything about LESS was very easy and friendly, I was quite enjoying LESS for a while…

…Until I discovered the truly awesome power of Sass and Compass. Looking back, I like to imagine LESS as the training wheels for beginners, or perhaps a gateway-drug into preprocessed CSS. Sass is the next level, a tool for the slightly more experienced front-end developer.

Why Sass is better than LESS

LESS aims to be as much like CSS in style, syntax and structure. While this is a nice thought for easing users into writing it, there are a few issues which make it a lot less fun to work with than Sass:

In LESS you can write a basic logic statement using a ‘guarded mixin’:

The equivalent in Sass uses if statements:

In LESS you can loop through numeric values using recursive functions:

In Sass you can iterate through any kind of data, which is much more helpful:

In Sass, you can write your own handy functions like so:

Hmmm… Which would you rather use?

Problems getting started with Sass and Compass

It seems like the biggest problem that people have with moving to Sass are:

To help with this, at Zing Design, we’ve written a tutorial for beginners eager to make the move to Sass and Compass which details every step to show just how easy and fast it is to get started, the awesome power of Compass, and how similar writing Sass is to other technologies.

If you’re already a Sass addict, take a look at our post about the problems with pre-processed CSS and the future of web presentation.

With the enormous popularity of Twitter’s Bootstrap, many designers and developers are moving toward this framework to fulfill their presentational needs. I’ve seen quite a few developers grumpy about the fact that it is built with LESS. As mentioned in another article, there are several forks of Bootstrap (like this one) which let developers customize their favorite framework in their favorite pre-processor language.

This article was originally published at https://www.zingdesign.com/less-vs-sass-its-time-to-switch-to-sass/

46 thoughts on “LESS vs Sass? It’s time to switch to Sass”