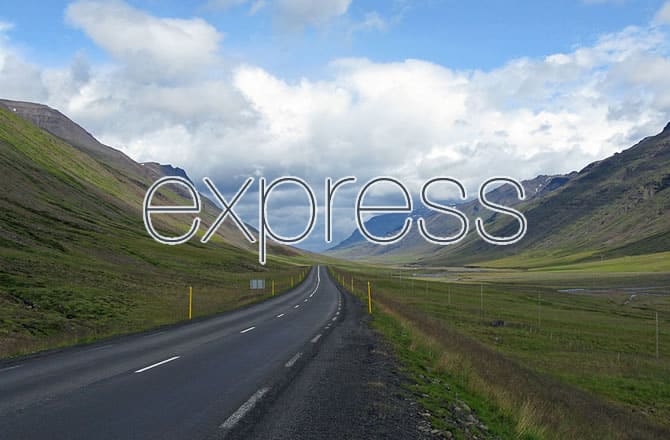 Recently I started learning how to build web applications using Node.js and the popular Express framework. In doing so, I realized that one of the most vital concepts in Express is routes. In this article I will share the basics of understanding routes in Express.

If you are just starting with Express and nee help getting it set up, check out my other tutorial on how to set up Express and run your first application in Node.js .

Setting Up Your First Route

Let us assume that you have set up a basic site using Express. In root folder you will find App.js file. When youopen App.js, you’ll see it defines two modules, express and http, to be imported along with some other modules.

Now that the express and http modules are imported and our Express app initialized, we can create a basic route, as below:

This route can be accessed using HTTP GET via the base site address. As you can see in the screenshot below, we receive a plain text response object from our Express application.

In Express if you have two route paths with same address, rather than throwing an error, it will pick theroute path that was defined first in App.js.

Passing Parameters to a Route

Let’s assume you want to pass a parameter while doing HTTP GET operation with route we defined earlier. You have two choices.

The first is to create two routes as shown below:

The second route will be accessed when a parameter is passed while performing a HTTP GET. So if you access application as in the screenshot below, you will get served via the second route path.

However, you may want to create only one route path where the id parameter is optional. To do this, specify it as : id? You can see an example in the route defined below:

This route can handle both types of requests, either with a parameter or without one. We are checking for the parameter within the code inside the route definition.

Express routes can be strings or regular expressions. Input parameters are parsed and accessible via req.params, for example req.params.id where id is the name of the parameter.

You can pass more than one parameter as shown below. While the id is expected, we are making op optional by adding ?

Below you can see the response when we pass both id and op.

Express allow you to use a wildcard within a route path using *. For example, the path defined below can be access using anything that follows the base URL (for example, if you wanted to build a “catch all” that caught routes not previously defined).

The following URL will be caught by this route.

You can create routes with other HTTP verbs . As mentioned earlier, the method names are matched with their corresonding HTTP verbs.

Where To Go From Here

Azat Mardanov also has a couple of posts on this site cover Express Fundamentals and Express error handling and middleware.

A version of this article was originally published at https://debugmode.net/2014/03/31/understanding-routing-of-expressjs-in-node-js/

6 thoughts on “The Basics of Express Routes”