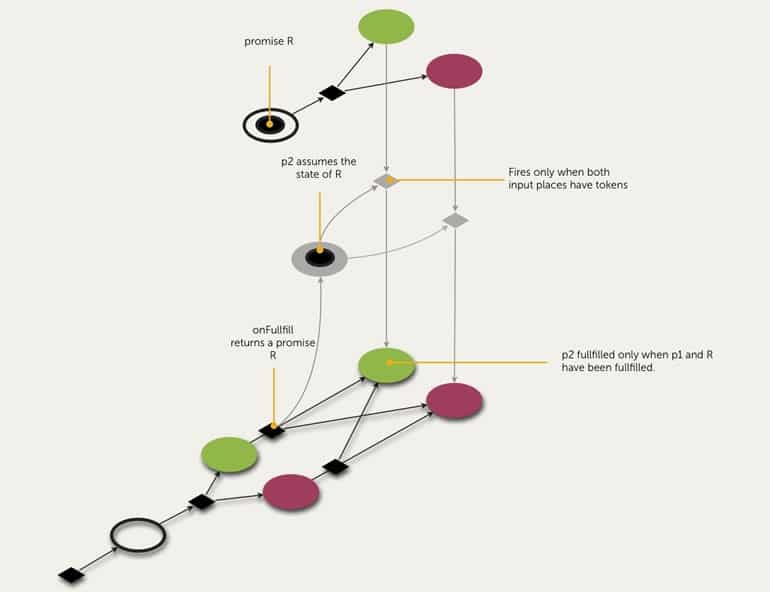 Promises are gaining ground as a programming construct for asynchronous systems such as web applications. In its simplest form, a promise represents the state of the result of some future computation.

I was introduced recently to this construct when studying jQuery and AngularJS. In the beginning, I wasn’t able to wrap my head around it. While I understood the basic callback mechanism that notifies when the computation is finished, I struggled a lot with capturing the efficiency that promises allow for easily composing asynchronous programs.

Petri nets have helped me a lot while creating an easy mental/visual model of promises (and their composition patterns).

In this post, I will refer to the “Promises/A+” specification. I assume you have already some basic knowledge of it. Besides, I will not indulge in any mathematical notation of Petri Nets here. If you are interested, I’ve put a suggested reading link at the end of this post.

A promise is an object that has a then method 1:

then is used to specify two callbacks — onFulfilled and onRejected — that are mutually executed when the state of the promise is resolved to either fulfilled or rejected.

In a Petri net, the promise state is represented by a token (illustrated by a black disk) that is positioned on a place. In the following figure, the token is on the pending place: 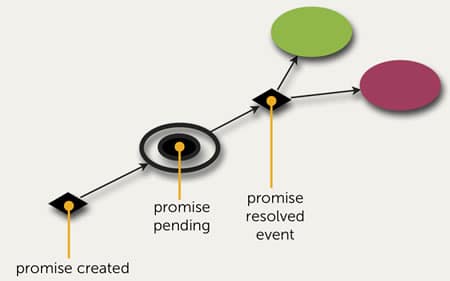 The token can move to another place when the transition events (represented by black squares) fire. Transitions can fire only when they are enabled, i.e., only when a predetermined number of tokens (weight) is positioned on their input places. Without any particular specification, the weight corresponds to the number of input places. The number of marks emitted into a place, when not explicitly shown, is 1. 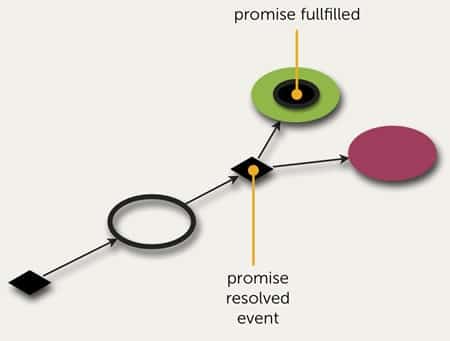 Similarly, the token moves to the rejected place if the promise has been rejected. So far so good.

As shown above, the then method returns a new promise:

Let’s see, with our new visual model, how the execution of the methods is synchronized with the promise itself: 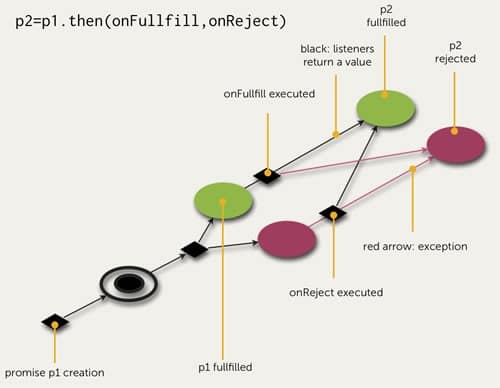 On the other hand, if either callback throws an exception, p2 is going to be rejected. So, if you want to escalate an error when the first promise is rejected, throw an exception in your onRejected callback.

Here I think that the real power of promises is unleashed. If your callbacks – onFulfilled or onRejected – return a promise (let’s call it R) you can make sure that p2 is resolved only when both p1 and R have been resolved; in fact according to the specification: 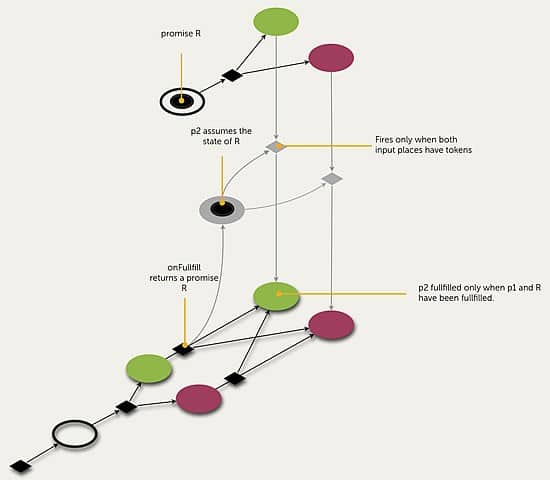 Petri nets allow you to model these synchronization points very easily. This is done by forcing the number of tokens that can enable a place transition. In fact, the transition of 1 token to the p2-fulfilled place can only be fired when there are two tokens on the input of the commanding transition.

I am astonished about how Petri nets allow us to think in a very clear way about how we structure our promise chain. I hope this can be useful for you as it was for me.

You can download the visual cheat sheet for Petri Nets for promises from this address (PDF).

This article was originally published at https://www.vittoriozaccaria.net/blog/2013/09/23/a-dumb-easy-model-for-promises.html

4 thoughts on “A Simple Visual Model for Promises”