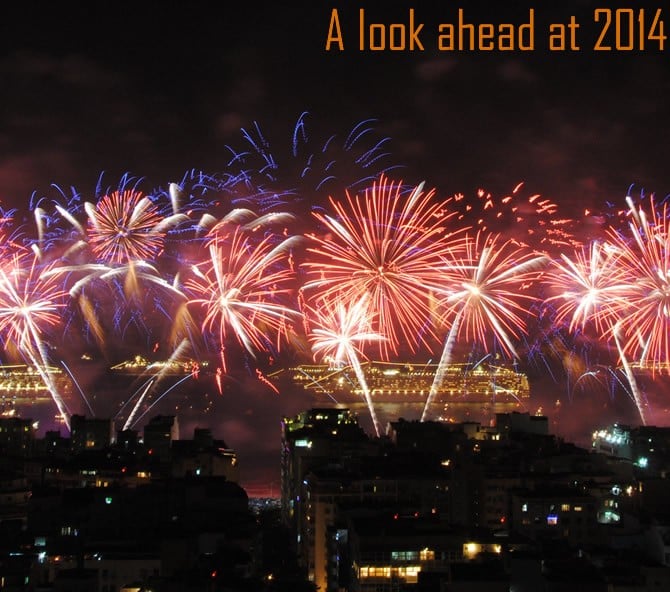 As noted in the companion post, things moved fast and furiously in the web development world in 2013. Thus, I asked a number of our authors to help shed some light on what web developers might need to know for 2014. Specifically, I asked, “Looking into 2014, what do you think will have the most impact on the way web and/or mobile developers work?” Let’s see what they shared.

In 2014, I am watching the Reactive JavaScript space closely. As we begin to hone in on performance in web applications, we’re learning that modifying the DOM tree is costly. Reactive JavaScript frameworks like ReactJS are introducing new ways to create DOM once, and then re-use it over and over again when possible. I think 2014 will see the rise of the Reactive UI.

As the level of support and adoption for HTML5, CSS3, and the new JavaScript APIs continue to grow, I think 2014 will see many more single-page web applications. More specifically, I am intrigued by the idea of an unhosted application, meaning a client-side application that features no conventional server-side environment beyond the serving of static files. Technologies such as Amazon Web Services’ SDK for JavaScript in the browser could prove to revolutionize the industry in this manner and push front-end web development forward in new ways.

I’m absolute crap at guessing the future. 😉 Personally I’ve been really into static sites lately and I think we may see more of that in 2014. To me, the benefit here is the ability to have a dynamic web app in development that becomes simple static pages in production. This allows for simpler deployment. I come from a background of dynamic web apps based on large servers (ColdFusion), and while this is powerful, it is “heavy” in terms of production. If I can get something similar and be able to deploy as static files, I think that’s a huge win.

HTML5 Hybrid apps will (finally) be as fast as native apps.

New tools, frameworks and libraries will emerge to allow web developers to reach a performance parity with native apps and release a single codebase on multiple platforms. Granted, this has been possible for a long time already, but (in my opinion) performance issues made it implausible for all but the simplest of applications. Gains in both hardware and software performance will finally allow the creation of HTML5/JS apps that are indistinguishable from ‘native’ mobile apps. The HTML5 vs native debate will still rage on, but common performance issues such as jittery UI interactions and app sluggishness will be greatly alleviated. Existing frameworks such as JQuery UI, Sencha Touch and Foundation have already emphasized performance gains in their respective toolsets, and will continue to improve in 2014. And we’ll finally see a public release of the famo.us framework early in the year, which is making some very bold claims in terms of capabilities and framerates. Coupled with zippier hardware, faster javascript engines, WebGL on mobile, and better debugging/performance tools, 2014 will be a great year to “write once, publish anywhere.”

Going back several years, we saw the dawn of mobile development. As we all know, mobile is now a major part of our daily web development lives. The players sure have changed; we’ve seen Apple, Google, Blackberry, Windows, and more have mixed success over the years since then.

In 2014, I believe we’ll see a similar shift. Some are calling it “the Internet of things”, but really we’re talking about interacting with the physical world around us. Already we’ve seen companies come onto the market like Fitbit that can track our footsteps to help us get fit.

iPhones have supported Bluetooth 4.0 for ages, but what’s changing now is that the newer Android devices are finally supporting it. Bluetooth Smart, 4.0, or Low Energy (LE) is the latest Bluetooth specification that allows us to interact with physical gadgets via this energy-saving protocol.

As we start to have ubiquity with “BLE”, it stands to reason we’ll see a huge upsurge in physical devices that can track or interact with the world around us. As web/mobile developers who have had to deal with different screen resolutions, we will now have the additional task of visualizing data from the pedometer in our pockets, controlling our homes’ lighting and alarm systems, or even using our phones’ 3D sensors to map the environment around us. That last bit sounds farfetched, but there are already companies working on mobile Kinect-like sensors — and of course, Apple has recently purchased 3D-sensor company Primesense.

All of this is why, in 2014, I think we’ll see a lot of opportunity to push our screens aside and get physical!

With responsive design we use media queries to change how the site looks however sometimes to provide a good user experience this isn’t enough. This is where using responsive JavaScript steps in, by making our JavaScript aware of the responsive state of the browser we can change the functionality of the site to better suit the capabilities of the current state. As we continue to push for JavaScript rich experiences, responsive JavaScript is going to continue to grow in importance. In 2013 we saw the arrival new libraries like SimpleStateManager for handling responsive states in JavaScript and I foresee that 2014 will be where we see the use of these libraries grow. Learn more at responsivejavascript.com.

I expect a great deal from Node. More applications like CMSes, frameworks and workflow tools.

Perhaps we can drop support for an IE version again? I surely hope so!

Today developers and designers write code for an almost infinite amount of different browsers and devices. Thanks to Responsive Web Design and media queries, we’ve solved a lot of issue in adapting a website for a great variety of screens. Nonetheless, there are still open issues. One of current main problems is serving content images for a wide range of devices, trying to serve the version that better suits each specific device. Content images are those part of the content, hence they should be shown using the <img> tag. Until now, a lot of proposals have been published to tackle this issue, and cover the wider range of use cases, without success. We had the srcset attribute, and the <picture> element. Then <picture> was deprecated and it seemed that srcset was the answer. Later, the src-n proposal was made, discussed, and rejected. Few weeks ago, the <picture> element proposal was resurrected, updated based on the feedback collected, and now seems that it has win the battle. Considering the story, you’ll understand my hesitancy in declaring that this battle has ended.

Although you can think to the problem of managing images as secondary, it’s very important. Consider that based on the latest statistics of HTTPArchive.org, images constitute about the 62% of the total weight of web page.

To wrap it up, I think a proposal to solve the problem of serving content images will win in 2014. The reason is that it’ll allow developers to spend less time struggling on what solution(s) to adopt to serve images properly while enhancing the response time of a website, which will, in turn, will lead to a better web for everyone.

In 2014 I hope tooling around ES6 becomes good enough that people are encouraged to try out the new language features, giving their feedback and accelerating the implementation process.

One technology that I think that will be important in 2014 is asynchronous templating. Async templates are templates that can be rendered in multiple steps. This means that part of a template can be immediately displayed while other parts that get their data from an Ajax request can be displayed as soon as that data is available. As performance becomes more important and with the rise of isomorphic JavaScript programming I think that asynchronous templating will see a big upswing in 2014.

In think in 2014 we’re going to see the true rise of the enterprise in mobile. This will be a major disruptor as it will see a significant increase in B2B apps, make Windows Phone 8 a legitimate third option, and potentially put muscle behind a smaller subset of established mobile development frameworks.

I think the biggest impact will be from the evolution of devices themselves to have even greater capability for web content, fostering a new generation of web experiences. Devices are getting faster and smaller with every iteration, and runtime performance and developer capabilities for web content get better with each successive release. We now have on-device remote debugging for HTML content in iOS, Android, Firefox OS, and Tizen, bringing rich desktop-like debugging to many mobile device platforms. More and more devices are starting to be able to handle extremely high-end/rich experiences. Put these all together, and we have better tools and better hardware to build better experiences for the end user. The capabilities of devices and web performance are going to keep going up in 2014, and developer tools will continue to mature. I expect developers will take advantage, further blurring the line between native and web user experiences and performance.

JavaScript. Over the next few years, JavaScript is bound to become the dominant language of the enterprise for IT.

A Slight Obsession Over Page Speed